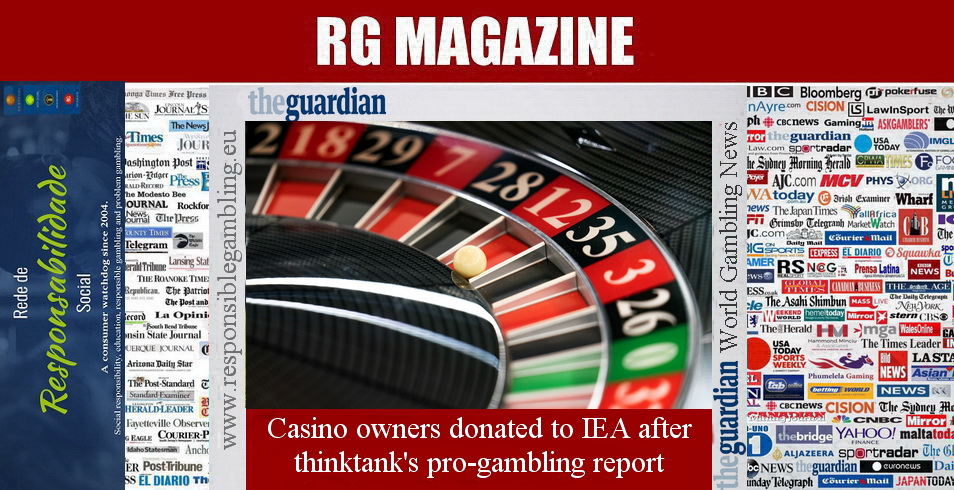 The casino industry donated thousands of pounds to the Institute of Economic Affairs (IEA) after the thinktank published a report on gambling policy that called for restrictions on the number of casinos to be lifted.

The National Casino Industry Forum (NCIF) confirmed it donated £8,000 to the IEA having fact-checked a draft of the report. Senior officials at the forum met the author before it was written and received feedback on its conclusions before its launch, according to an internal document seen by the Guardian.

The report was published as an “IEA discussion paper” with no mention that casino owners, who later made a donation, had been in any way involved.

The report concluded regulations were getting in the way of more casinos opening and there was “no obvious reason why a reasonably sized town or city should not host at least one small casino”.

The forum considered the report would be a more effective means of getting its message across than buying space in a magazine, according to the internal document.

The IEA contested that anyone outside the thinktank had seen the report before publication and denied its conclusions had been swayed or influenced.

The donation emerged after the Guardian reported how the IEA has been offering potential donors with US farming interests access to government ministers and civil servants as it raises cash for new research to promote the kind of free-trade deals championed by hardline Brexiters.

The IEA arranged an hour-long meeting with the Brexit minister at the time, Steve Baker, for a US donor whose organisation had pledged £35,000.

The Charity Commission announced an investigation, following concerns about the thinktank’s political independence. The government’s lobbying watchdog, Alison White, said she would launch her own inquiry into whether the IEA, which is established as an educational charity, should be registered as a lobbying organisation.

The IEA’s director, Mark Littlewood, also told an undercover investigator posing as a representative of a fictional potential donor that its clients could fund and shape “substantial content” in research reports that would support calls for a free-trade deal between the UK and US. The investigation was carried out by Unearthed, part of Greenpeace.

Labour alleged the IEA was “engaged in extensive lobbying and controversial political campaign activity in pursuit of specific policy goals, which go well beyond the scope of its objects as an ‘educational’ charity”.

The IEA denied it had breached charity law. Littlewood said: “Donors are unable to influence the results and conclusions of our research. He added: “We also make no apologies for seeking to inform and educate politicians at the highest levels of government.”

The IEA declined to comment in detail on its arrangements with the casino operators but a spokeswoman said: “It is perfectly legitimate to check facts and data with relevant industry representatives. This categorically does not mean that they have any sway or influence on the conclusions we come to in our research.”

It also denied anyone external to the IEA had seen a draft of the report or made any changes to it before publication.

The NCIF did not respond on the record, but a source confirmed it made the donation after the launch event, which was attended by forum members.

The internal document written in advance of the report’s publication suggested the forum had agreed to fund the report as a way of getting its message across through the IEA and had agreed to increase the budget from an earlier lower figure.

The NCIF denies it commissioned or paid for the report but rather decided to make a donation after it launched.

The IEA’s report on casinos, published in 2012, was titled Seven Years Later: Casinos in the Aftermath of the 2005 Gambling Act.

It attacked “feeble and unsatisfactory” plans to only extend the number of areas permitted to host casinos from 53 to 56 and argued the exchequer was forgoing £30m a year in gaming duty because of unused licences.

The Greenpeace investigation also shed light on how other donors to the IEA include BP, which has donated to the IEA every year since 1967, and how donors are able to address government ministers at IEA events.

Littlewood told the undercover investigator that many of the oil company’s public affairs executives attended IEA events. He stressed that the IEA had never written anything “to specifically help BP’s precise business model”.

“The representative from BP will often frame his question within the context of his company: we at BP are really struggling with these regulations which we don’t believe are improving safety of our workers or improving the environment and they are putting up the energy bill for ordinary British citizens. Can you tell me why you’re not going to change this, minister? That would be a normal part of the conversation.”

He added: “People can’t leave their interests at the door.”

BP said: “BP engages with and shares our perspectives with a number of thinktanks in the UK, allowing us to keep informed of different viewpoints and policy conversations. We have a longstanding relationship with the IEA, a respected free-market thinktank, as we do with others including the Centre for European Reform and the Green Alliance. The IEA hosts roundtable events under the Chatham House rule which our staff have attended; these have involved politicians from different parties, academics and journalists.”